The fourth annual Cabernet Franc Carnival was held on 21 May on the Avontuur Wine Estate located along the R44. The rolling green lawns, view of Somerset West and the peaceful horses in their paddock made for the perfect sunny Saturday escape.

The wine and stud farm played host to some of the Western Cape’s finest producers of this elegant variety. Estates such as Rainbow’s End, Warwick Wines, Knorhoek, David Finlayson and Raats Family Wines were among some of the prestigious representatives on the day.

An interesting newcomer known as The Garajeest also debuted their first Cabernet Franc; the 2015 “Bruce” vintage. A young, eclectic winemaker, Callan Williams explained that a lot of the labeling and branding of her wines comes from a strong influence and love for music. She continues that the reason she decided to make wines is because of her Italian roots as well as her keen interest in the chemistry behind wine. This unconventional combination inspired her to create wines ultimately to bring friends and loved ones together, to enjoy and celebrate. What better way to do this than by doing as the Romans did? Wine, after all, tastes best shared in the company of good friends.

The day also helped to promote Cabernet Franc as a variety that can hold its own and brought forward all of its best qualities; showing that, just like in an Academy award-winning movie, the best supporting role (as we know, cab franc most often being used in Bordeaux-style blends) is just as important as the leading actor to help clinch that Oscar.

Finesse and balance, elegance with a unique and undeniable presence, the Cabernet Franc grape has done well to promote those strong Bordeaux roots that are so reflective in many of the styles of wines from our own home-grown winemakers.

I enjoyed a wood-fired pizza…soon followed by a Belgian waffle adorned with fresh strawberries and drizzled dark chocolate while contemplating Vrede en Lust’s offerings on this idyllic Saturday afternoon. Soft music, toasting glasses and wine-stained lips were the order of the day.

As a young wine-enthusiast, I asked Hermanuspietersfontein’s Winemaker and General Manager, Wilhelm Pienaar a couple of questions on what he thinks is most important when starting out and developing one’s palate and trying out new wines. His response was good and clear: ‘Know what you like. Don’t be afraid to say that you do or don’t like something. If you think something tastes like wet forest floor or your granny’s socks, let ’em know. If you taste something specific or something that makes you feel nostalgic, say so. Everyone has a different frame of reference and so, we all make different connections with wine.’

Wilhelm is very much of the stance that they want their wines (their Swartskaap taking the spotlight on the day) to be enjoyed by everyone. Wine isn’t meant to be inaccessible or only for one type of consumer. He encourages people to believe in their palates and also to enjoy and discover all that the world of wine has to offer. How often do we taste certain elements in wine after the winemaker has mentioned them, or brought them to the fore? Awakening your own senses is the key to finding wines that you love.

Each event attendee was also given a ballot in which he or she decided which wines they enjoyed most. All wines of the day were rated out of ten; so ultimately the public could decide which wine they felt was best out of the day’s premium offering. Three of the lucky participants would also go on to win a selection of wines for casting their vote! What more motivation did one need to join in?

The day as a whole was a great success; mingling of sommeliers, wine bloggers, wine lovers and merchants alike, basking in the beauty of Avontuur’s features, discussing the multi-faceted French grape in all its glory and reclining on a comfortable deck chair under the blue-turned-ruby-red skyline. An exhale moment of delight and peaceful relaxation.

Here’s to the next one! 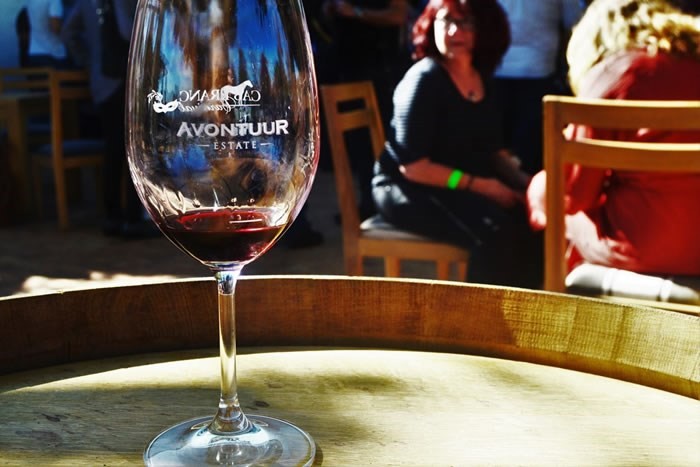